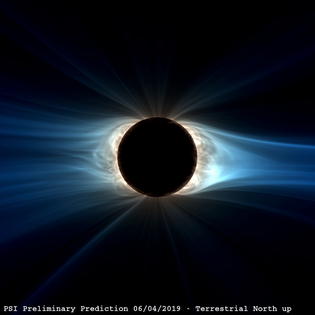 A prediction by Predictive Science of the magnetic field lines of the Sun at the time of next week’s total solar eclipse. It shows the inherent complexity of the Sun’s magnetic field and its intimate connection to visible emission from the solar corona.

Imagine being above the clouds during a total solar eclipse. Up at 45,000 ft. during an eclipse is the one place and time in space that a person can see the mighty shadow of the Moon approaching, before a guaranteed view of a beautiful diamond ring around the Sun that heralds a few precious minutes of totality. Only in this brief darkness in the day is it possible to stare in awe at the tenuous, wispy white outer atmosphere of the Sun, its corona.

If you were in that place and time, would you look at a TV screen instead?

The Smithsonian Astrophysical Observatory’s Jenna Samra with the airborne infrared spectrometer (AIR-Spec) during an expedition to measure the solar corona during August 21, 2017’s “Great American” total solar eclipse. She will repeat it on July 2, 2019 over the South Pacific.

Tomorrow, on July 2, 2019, people will pay thousands of dollars to do just that as a total solar eclipse rips across the planet for the first time since August 21, 2017’s “Great American” total solar eclipse. However, one eclipse-chaser will have a ring-side seat to the spectacle and yet likely see nothing. “I’ve never seen an eclipse, and if I stay in this business, I may never get the opportunity to,” says Jenna Samra at the Smithsonian Astrophysical Observatory, who will fly from Lima, Peru to Easter Island in the South Pacific, intercepting a total solar eclipse along the way. She’s part of a team that hopes to study the corona in the infrared to see it holds clues to the Sun’s mysterious magnetic field.

It’s a repeat of an experiment Samra first helped perform above Kentucky on August 21, 2017 during the eclipse across the USA. “Unfortunately I only saw it on the screen because I was controlling the instrument,” she says of the four-minute totality she experienced. Or rather, did not. “We had to do a lot of the work getting the telescope at the right angle and position so it was pointing at the Sun at all times,” she says.

Samra intercepted totality over Kentucky in the National Center for Atmospheric Research’s Gulfstream V jet, and will do so again tomorrow. On board will be an upgraded version of the AIR-Spec, an airborne infrared spectrometer that splits the corona’s light. “We need to be above the Earth’s atmosphere because the water absorbs a lot of infrared light, so we fly on this airplane at about 45,000 ft. to look for particular infrared colors in the corona that are that are very bright, called emission lines,” says Samra, who co-authored a paper on the 2017 expedition. It’s thought that data on the emission lines might be useful in the future for measuring the coronal magnetic field. “If you can measure the current as magnetic fields you can predict a lot of solar eruptive events, and predict space weather,” she says.

The white glow of the Sun’s corona is sculpted by the Sun’s magnetic field.

Although Samra personally saw nothing of the “Great American Eclipse”, she might grab a few seconds with Sun this time out. “I may be able to a peek at this one because it’s much longer,” says Samra. The jet will be over the South Pacific, about 600 miles off the west coast of Peru, close to the point of the greatest duration of totality. Technically that’s four minutes and 33 seconds, but because the jet will be moving in the same direction as the Moon’s shadow, totality for Samra will last for up to eight minutes.

AIR-Spec, an airborne infrared spectrometer that splits the corona’s light.

Tomorrow’s eclipse is going to be very different from the “Great American Eclipse” purely because of the place and time that it occurs. Although Samra will be observing totality close to noon local time, July is winter in the southern hemisphere so the Sun will be only about 50 degrees above the horizon, as opposed to the 65 degrees of the “Great American Eclipse”, which occurred in summer in the northern hemisphere. “The 2017 eclipse was pretty high in the sky and you pretty much have to be laying on the floor of the plane to see it coming through a window,” says Samra. “This time I’ll hopefully be able to look out the window and see it.”

The team outside the plane the day before the 2017 eclipse.

There are plans to continue the experiment at future eclipses, and Samra’s team are already planning for the next total solar eclipse on December 14, 2020, also in South America. “We’ve got a proposal in to make a more general instrument for the 2020 total solar eclipse that can be pointed out of any of the windows, turning the Gulfstream V into an airplane that can really look at the Sun without much work for the researcher,” says Samra. “Then we want to build a platform that we can make available to other researchers to use in 2024 and beyond.”