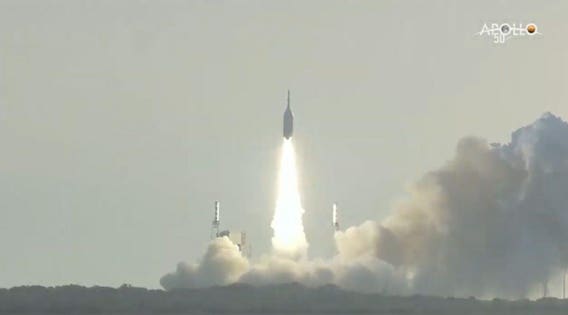 NASA has successfully performed a launch abort test of its Orion crew capsule, designed to one day take humans to the Moon.

At 7 A.M. Eastern Time today, July 2, Orion lifted off from NASA’s Kennedy Space Center (KSC) at Cape Canaveral in Florida, flying into the sky before returning to Earth. Called the Ascent Abort-2 (a previous test occurred in 2010), the test is a crucial step towards certifying the capsule safe to launch humans.

“Everything looked really good,” said Mark Kirasich, the Orion Programme Manager, in a live stream for the launch. “By all accounts it was magnificent.”

This test, costing $256 million, was designed to check if the Orion capsule could safely escape from the rocket it launches on, expected to be the delayed and over-budget Space Launch System (SLS), in the event of an emergency.

The Launch Abort System (LAS) on the capsule consists of a large needle-shaped structure, equipped with solid rocket motors on board. These provide a thrust of 400,000 pounds, enough to pull the crew capsule away from the rocket.

On this launch, however, the capsule was performing its test from the safety of the ground. The capsule launched with its own engine, before about 52 seconds later the LAS kicked in.

As intended, the capsule had no parachutes on board. So after reaching its maximum altitude and detaching from the LAS, the capsule returned back to Earth before slamming into the Atlantic Ocean and smashing into pieces. It will not be recovered, instead being left to sink to the bottom of the ocean.

Crowds gathered to watch the launch in action.

In total, the flight lasted three minutes, before Orion hit the ocean at 480 kilometers per hour. It’s expected most of the capsule was destroyed in the event, but if any material did survive the impact, nearby ships will pick it up.

The launch was designed to provide data on how the LAS performed during the test. While Orion was transmitting data, it also had 12 Ejectable Data Recorders (EDRs) on board. Essentially mini black boxes, they recorded data and were jettisoned on the descent, to be picked up later.

NASA had actually put a telephone number and email address on the front of each EDR, in the case they were not able to find them. So if you do find one on a beach somewhere, let NASA know as they’d probably quite like it back.

Now NASA will move towards the next test of the Orion capsule, which should be considerably more impressive. As early as late 2020, Orion will be sent around the Moon by an SLS rocket on an uncrewed mission called Artemis-1. The flight after that, hoped to be in 2024, will be the launch of one man and one woman to the Moon on Artemis-2.

That remains a lofty and ambitious goal, but with today’s successful test NASA has taken a key step in the right direction. And maybe, just maybe, Orion really will take humans to the Moon in five years. Maybe.