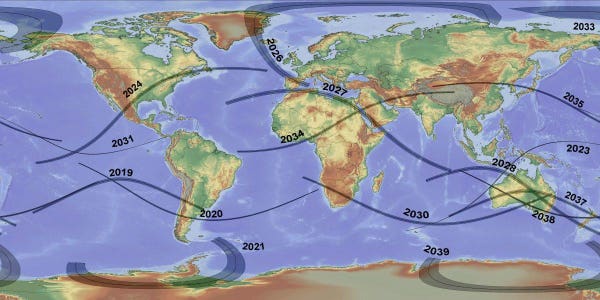 Yesterday there was a total solar eclipse in Chile and Argentina, a reminder that nature’s grandest spectacle is not particularly easy or affordable to experience. Only a slither of Earth’s surface goes under the Moon’s umbra (or central shadow) during a rare total solar eclipse, and you have to be in the right place at the right time to experience totality. What a perfect excuse to travel.

Darkness in the day? Yes. Rapidly cooling temperatures? Absolutely. Plus strange animal behavior, an eerie and unbelievable quality of light, and … totality. The solar corona. The Sun as it truly is, as you’ve never seen it before. For starters, it’s a stark white, not yellow. As a star along in space, its white corona streaming outwards.

North America is not a bad place to be if you want to experience totality again, but if you want to make a habit of it, or see the very best totality of your lifetime (it’s coming up in just eight years!), here’s when and where to go until 2040.

Where: Argentina and Chile

No sooner had South America experienced a total solar eclipse then it gets another one! This time it’s further down the continent, with totality coming to the Chilean Lake District at Pucón and Villarrica Volcano, and also to the more remote (and possibly sunnier) western Argentina. Totality will last just over two minutes, and it’s high in the sky in the middle of the day.

This could be a tricky one, both in terms of finding clear skies and affording the price of a cruise around Antartica (or a flight above the clouds from Chile). However, it will be special since totality will interrupt an otherwise 24-hour sun. Expect just under two minutes of totality.

The beauty of Turquoise Bay at the Ningaloo Reef Marine Park is captured perfectly in this shot with its pristine white sands, crystal clear turquoise waters full of fish and wide open sunny skies

Ever fancied swimming with a whale shark? You can do that, willing whale sharks allowing, in the Ningaloo Reef off Exmouth Peninsula in Western Australia. Totality during this hybrid solar eclipse (you can ignore the “hybrid” part since all it changes is the beginning and end of the eclipse track which is at sea) lasts just over one minute.

Where: Mexico, USA and Canada

Are you ready for the “Great North American Eclipse?” A four-minute totality (twice what was possible at the Great American eclipse in 2017) will be observable from under a 100-mile wide path of totality that will stretch from Mexico’s Pacific Coast through Texas, Oklahoma, Arkansas, Missouri, Illinois, Kentucky, Tennessee, Michigan, Indiana, Ohio, Pennsylvania, New York, Vermont, New Hampshire and Maine, and in Canada, Ontario, Quebec, New Brunswick, Prince Edward Island and Newfoundland. It will pass over Niagara Falls.

Where: Greenland, Iceland, and northern Spain

The western tip of the Snæfellsnes Peninsula in Iceland will be a popular place for a two-minute totality, as will Icelandic capital city Reykjavik, which will experience just over a minute. Many will be tempted to head to northern Spain for this one, though the eclipse will happen dangerously close to sunset, so will be low in the sky. That said, Mallorca in the Balearics is line for a beautiful eclipsed sunset if the clouds play ball.

Expect to see dozens of “eclipse + Kirkjufell” photos in 2026.

Mark your diaries. Book a hotel a couple of years in advance. Do whatever you need to … this is the big one. Every 18 years there’s a massive six minutes+ totality, and this is the one during this era. The path of totality crosses southern Spain and much of North Africa, but every eclipse-chaser on the planet has already decided that Luxor in Egypt, home to the Valley of the Kings and where a massive six minutes 20 seconds of totality will be possible, is where to go.

The Temple of Karnak is a huge complex of various small and large temples and chapels in Luxor.

From Christmas Island, the wild Kimberley coast and the Bungle Bungles of Western Australia to Northern Territory’s Devils Marbles, there are some remote locations to enjoy over five minutes of totality. However, the world will be looking at Sydney Harbour, where three minutes 44 seconds will be on offer. Queenstown in New Zealand will see totality close to sunset.

Though mostly at sea, Southern Africa will make a great destination to see experience a two-minute totality before a game drive in Namibia and Botswana. South Australia will get it an hour or so before sunset.

A long and lonely cruise from Hawaii will be how to see this hybrid solar eclipse. A very narrow path of totality that’s mostly in the North Pacific Ocean, the spectacle will transit from a “ring fire” annular solar eclipse to a total solar eclipse southeast of Hawaii, then back again.

Where: Alaska and Russia

Fancy the chance of seeing the Northern Lights during a two-minute totality from Alaska? Being the “Great Bering Strait” eclipse in clear skies is probably unlikely, but will also offer the chance to explore remote towns like Barrow/Utqiagvik, Prudhoe Bay/Sagavanirktok and Kotzebue.

The first ‘equinox eclipse’ since 2015, a path of totality brings four minutes 9 seconds of totality to Central Africa and South Asia. Southeastern Egypt is probably the place to go, and eclipse-chasers will be there in droves for this long eclipse. The UNESCO World Heritage Site of Persopolis in Iran is another option.

Persepolis was the ceremonial capital of the Achaemenid Empire . It is situated 60 km northeast of the city of Shiraz in Fars Province, Iran. The Gate of All Nations also known as the Gate of Xerxes, is located in the ruins of the ancient city of Persepolis, Iran.

Where: China, North Korea and Japan

Beijing, China or Tokyo, Japan will be the places to go for this East Asian eclipse. Just north of Beijing will see almost two minutes of totality, similar to Pyongyang in North Korea, though a trip just north of Tokyo will get you an extra 30 seconds.

A mid-winter eclipse Down Under will see places such as Geraldton, Uluru (Ayers Rock), Byron Bay, the Gold Coast, and the remote Lord Howe Island is thrown under the moon’s shadow for as long as three minutes 58 seconds. The North Island of New Zealand will also get a look-in, including the Ngauruhoe volcano (Mount Doom in “The Lord of the Rings” films) in Tongariro National Park, and coastal Napier in Hawke’s Bay.

View of Mount Ngauruhoe in the Tongariro National Park on the North Island in New Zealand.

A Christmas eclipse! If eclipse-chasers have any air miles left from events 18 months previously, this mid-summer eclipse will occur largely over the remote Australian Outback, though the path of totality passes just north of both Adelaide and Melbourne. The two-minute totality will also be seen over the northern and southern tips, respectively, of New Zealand’s North and South islands.

Cruise ships plying the southern seas south of New Zealand might glimpse a one minute 30 seconds or so of totality, though this eclipse is going to be very tricky. It’s also going to be very low in the sky.

Disclaimer: I am the editor of WhenIsTheNextEclipse.com