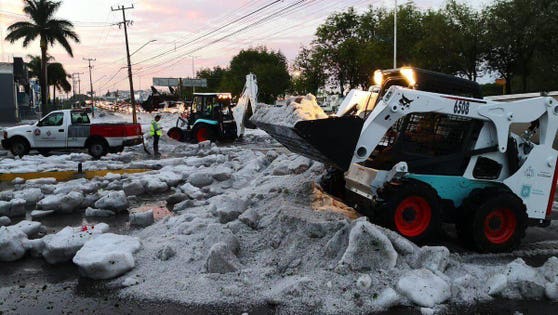 Did you see the tremendous pictures of hailstones piling up in parts of Mexico this week? It is certainly an extraordinary spectacle. Words like “freak” or “epic” storm are being used to describe the event. According to the Accuweather writer Amanda Schmidt,

The Mexican city of Guadalajara woke up to a wintry surprise on Sunday morning. The city, which has been experiencing a hot, sweaty summer, was blanketed with up to 3 feet of ice in some areas following a heavy hailstorm.

As I browsed the social media, I saw claims of climate change, “end of times” language, and sheer awe that hail fell in Mexico during the Summer. I thought that it would be instructive to provide context and perspective on this event before things get too carried away.

Hail is not uncommon during the summer. In fact, it is quite likely. For many people, it is counterintuitive that large chunks of ice can fall from the sky during the hottest season of the year. Hail forms in cumulonimbus clouds, which are quite common during the warm season. NOAA’s National Severe Storms Laboratory website points out that:

Because lightning is a good proxy for thunderstorms, it is clear from the lightning climatology map below that Mexico can experience the type of storms that produce hail. Legendary climatologist Stan Changnon, Jr. published a paper on the climatology of North American hail in the Journal of Applied Meteorology. This 1977 study found that hail is most likely to occur in the Spring or Summer primarily in the Central Plateau and high mountains. His study also found hail to be less common in coastal Mexico or the Yucatan Peninsula. Most places averaged 3 to 4 hail days per year, but higher elevations could experience more hail days.

It is not surprising that higher elevations would experience a greater number of hail days. Florida receives more thunderstorms than most states in the U.S., but “hail alley” Colorado, Nebraska, and Wyoming. These states receive 7 to 9 hail days per year according to NOAA because the freezing levels (32 degrees F or less) in those regions are closer to the ground. Guadalajara, Mexico sits at an elevation above 5,000 feet. Hail is not necessarily abnormal at this geographic location. What about the vigorous amount of hail seen in photographs all over social media?

Climatologist Daniel Swain offers some cautionary thoughts about those images. Swain is a climate scientist at the University of California-Los Angeles (UCLA). He told me in a message:

It was clearly a dramatic and extremely impressive event with major local impacts–but I think the physical characteristics have been fundamentally mischaracterized. I have no doubt there were 1-2 meter hail drifts in some spots (photos attest to that)–but those drifts were clearly created by flash flooding down streets and culverts in a highly urbanized area. (A strong clue are the cars stacked on top of each other–water did that, not hail!). Come to think of it, the physical constraints of a single storm dropping 6+ feet of actual solid ice would probably be prohibitive anywhere on Earth, I would think. I don’t know the exact numbers, but even just considering the amount of column water or the vertical forces required to loft that much solid water…well, suffice it to say it would stretch credulity.

I want to close by dealing with the climate change question. Even officials in Mexico were so stunned by the hail drifts that they mentioned climate change. It is quite common after extreme weather events for some people to say “see climate change caused this.”  The other partner in this very familiar social media “waltz” is the”things happen naturally or are not unprecedented” narrative. Climate change is very real, and humans are a significant cause of our crisis. Virtually every credible scientific organization and peer-reviewed report affirms this point. A 2016 National Academy of Science report even explored the emerging science of attributing current extreme events to climate change. Concerning severe convective storms that produce hail or tornadoes (SCS on the graphic below), linkages are not nearly as compelling (right now) as they are for heatwaves, drought, extreme rainfall, and lack of extreme cold events. As recently as 2018, hail experts attending a conference at the National Center for Atmospheric Research (NCAR) noted that hail damage, mainly driven by population and development, has increased. They acknowledge uncertainty about the role of climate change. Emerging climate modeling studies, however, are sending signals of concern. A 2017 study in Nature Climate Change finds the possibility of fewer hail days but larger hailstones, which cause more damage. A study published in Climate Change does not specifically identify hail but finds that future atmospheric conditions may be more conducive to increased severe weather activity. As with this hailstorm in Mexico, hail-climate change connections will clarify over time.

Confidence in extreme weather events and linkages to climate change.